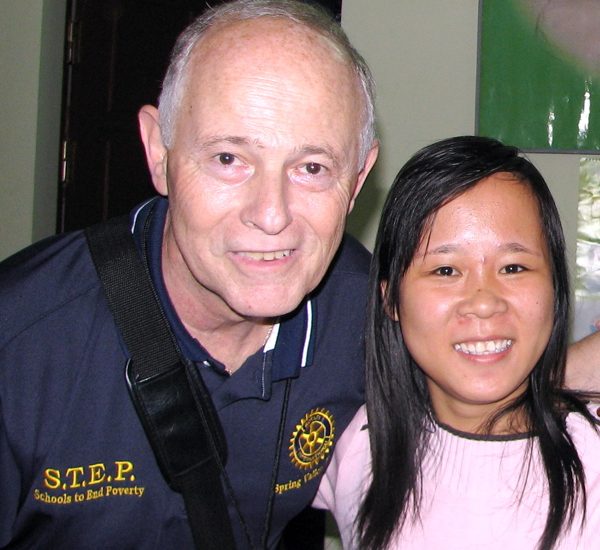 I’ve known Howard Goldin for about 25 years. When I met him, he was Spring Valley’s Chief of Police, and he helped my kids do a science fair project on “the science of crime”. After he retired, he and his friend Ed Frank started sharing their experiences as combat veterans, teaching “Vietnam Memories” in  classrooms around the area. That was how he met a young adopted girl from Vietnam named Hai whose father had died because of Agent Orange. She recognized a pith helmet they were displaying as one her grandfather used to own. Hai was from North Vietnam and Howard realized that her grandfather had been an enemy soldier. Hai referred to the Vietnam War as “the American War” which caused Howard to realize there was another way to view what had happened.

In 2000 Howard suffered the tragic loss of his son, Jason, to the generational effects of Agent Orange. That painful event, along with meeting Hai, sparked his decision to go back to visit Vietnam.  His first delegation was composed of 11 veterans, including Howard and Ed, and 6 civilians. Hai and her adopted sister and mom were part of the group. They traveled the country and observed the devastating effects on generations of Vietnamese of Agent Orange. “We never cleaned up,” Howard says. Agent Orange has a half life of 80 years, so many children were left orphaned or suffered health effects of their own. They live in extreme poverty, and many end up working in the sex trade to survive. The small delegation was horrified by what they saw.

Coincidentally, the group ended up on Son My beach on the 30th anniversary of the notorious My Lai Massacre in which 504 Vietnamese civilians were killed. They met some former enemy soldiers who were there commemorating the event. Together they sat and spoke about war and peace. They told stories and shared their experiences. By the end of the evening Howard was transformed. “That’s when I let my war go,” he told me. He left Vietnam more peaceful and with a new sense of purpose.

Howard and Ed decided to attack the problem of poverty driving children into the sex trade. Their solution lay in education. Some Dominican nuns approached them with a

problem. They had been given land to use to build a school, but if the school wasn’t built within two years, the land would be taken back. Howard and Ed turned to their Spring Valley Rotary group. They created S.T.E.P., the Spring Valley Rotary, Schools to End Poverty project. The grassroots organization raised the money and built the Rose School. Since then S.T.E.P. has grown and flourished. There have been return trips to Vietnam, as well as schools built in other countries such as Jamaica, Honduras and Ghana. The group has expanded to providing wheelchairs, hygiene supplies like toothbrushes, and medical supplies like brain shunts to treat the hydrocephaly that affects many in the second and third generation exposed to Agent Orange. They have worked to fight hunger, and provide clean water and sanitation. Today, the number of children who have benefited from their efforts approaches ten thousand. There are Vietnamese young people who were educated at S.T.E.P. schools and now sponsor the education of other children.

The good that has been done is impossible to measure. From the magnitude of it, it would 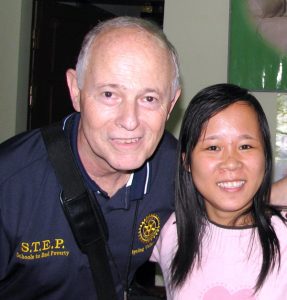 seem that there are hundreds of people working on these projects, but actually, there are only ten board members of S.T.E.P. whose tireless efforts and willingness to look poverty in the eye and not turn away are changing lives every day. This Fourth of July, let’s celebrate how we, as Americans, can be grateful for the resources we have, and think about how we can use them to make a change for the better. Let’s follow the example set by Howard Goldin, a warrior whose journey of return led him to turn personal loss into a legacy of hope.

To find out more or to donate to S.T.E.P. go to http://schoolstoendpoverty.org/